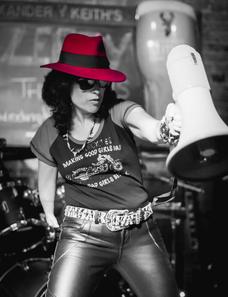 In addition to being a musician, Angie Sandow (LEFTY) can be seen riding her motorcycle with 1 hand as a result of a congenital birth defect, and occasionally plays guitar using a prosthetic.  Angie is also an inspirational speaker, blogger and avid motorcycle enthusiast.

Angie founded JUSTRIDIN.com to share her message which is;

- what one can accomplish with positive encouragement and support

- the power that words and actions can have

- the importance of not judging people based on appearances

- to feel comfortable with the wonderful person that you are

To learn more about Angie, visit her website by clicking below.

Lefty And The Goons is a 4 piece high energy classic rock band.  If you like to dance, sing and have a great time, this is the band that you must see!!

What sets Lefty apart from other bands is their selection of songs and how they engage the audience.  You will have a great time and might even find yourself singing directly into the mic if you wish!!

Lefty believes in giving back to the community, and was  fortunate  to perform at the following fundraisers and events;

- September, 2019:  Healing Roads For Radi, Downsview Park, in support of young Radi who was hit by a motorcycle and left for dead.

- November 2017:  GOVFEST Battle OF The Bands in support of the United Way and Ryan's Well (supporting clean drinking water in Africa)

- October 2015:  Rocking It Bald 3 held Oct 24, 2015 at The Irish Shebeen, 5555 Eglinton Ave W. in support of Wellspring - a non funded organization for cancer patients and caregivers.